Nestled in the San Jacinto Mountains in Riverside County, Idyllwild is the largest of three adjacent towns.

Before this trip, I had never heard of Idyllwild, let alone could I point it out on a map; however, I had a pleasant time exploring this quaint town.

Unlike Big Bear, my usual “I want to be nature-y and be out in the wilderness location of choice”, Idyllwild is a town for hiking and relaxing. It is the perfect weekend getaway for anyone in San Diego, Orange County or Los Angeles looking for a vacation.  I would say it is more like the mini Yosemite of Southern California.

On this trip, John and I left San Diego at 5:30am and drove with the rising sun.  It’s been a while since I’ve woken up that early. I have to say it is nice to see the new morning when darkness turns to light.

We arrived at Idyllwild at 7:30am.

Online we read that you needed to get a permit to hike Suicide Rock (Check out other trails) but we there’s only certain ones you do need to get their $5 Adventure Pass. A simple yellow slip pass was all we needed, though we didn’t see anyone check it on our hike.

We hiked on was Suicide Rock, one of the four hikes that branch off from the Deer Springs Trail. It is 3.35 miles up and 3.35 miles down giving it a total of 6.7 miles roundtrip.

Since it is a up and down kind of trail, it is a bit tiring in the beginning since you are going up the entire first half, but on the upside or rather the down, once you finish summiting the hike it’s all downhill on your second half, making this a moderate hike in my book.

The hike is nicely shaded and has views that you just can’t help but to stop for a few seconds, drink some water and breath it all in.  My favorite part of hiking during fall is seeing the changing leaves. The golden touches surrounded by green, reminds me that it is actually autumn because living in Southern California you forget it’s November with the summer like heat.

During lunch we were provided a beautiful view.

It took us a total of about 5 hours (including the countless stops to take pictures and the time it took to eat lunch).

The Town of Idyllwild

We visited the center for dinner the first night and lunch on our second day.

We opted for the fast food the first night at a restaurant called CJ.  It’s a family owned dive with everything from Mexican food to American food. I ordered a Hawaiian burger and John ordered the breakfast burrito. I don’t know if it was just because I was hungry from the hike or what, but it was really good, very tasty.  Everything was fresh and crispy from my burger to the fries and they used real eggs in the breakfast burrito because you know some places put that egg substitute instead. The owner and his daughter were very nice even though we came close to closing (They close at 5pm).

For lunch the following day we ate at Idyllwild Bake Shop & Brew. I had seen it on Yelp and it has a 5 star rating, this establishment bakes all it’s goods in-house and they have local beers brewed with some interesting flavors (cereal stout anyone?).  We ordered a pair of sandwiches, chicken pesto avocado and BBQ chicken, which also includes a bag of chips, and though they appeared to be small, they were quite filling.

There is also a small cinema that only shows one movie at a time three times a day (3pm, 4:30pm, 7pm).  John and I are movie goers but wasn’t interested in watching Inferno, the third installment of the Da Vinci’s Code series.  I would love to go next time to see how big, or small, the theater is.

A hidden gem for John was a small shop with sports memorabilia.  We were passing by and saw that this store had 1990s NBA player cards, along with baseball and football cards. John being a basketball kind of guy, I purchased him two player packs for a dollar each.

Where to stay in Idyllwild?

For accommodations, I found this cute little Airbnb, Idyllwild Mountain Casita, that was perfect for our short one night trip.  Breakfast on the porch was great way to just relax, soak up some vitamin D and not worry.

Our host Cheri was amazing!  She did a wonderful job answering our questions and providing a place that had all our basic necessities. There wasn’t wifi… OH NO! But honestly I didn’t care for it, it’s always nice to just unplug and not stare at my phone.  But if you are in dire need, I still had signal on my phone. There’s always the coffee shops in town.

Never used Airbnb? I highly recommend trying it out. Here’s 15% off your first booking:

I purchased a beautiful postcard from one of the shops in town and after some googling, John and I found out that the picture was taken at a park five minutes away.  We jumped into the car and drove to the County Park where we found yellow trees, but not the cool yellow tree path pictured in the postcard. This was still a photo opt, so John frolicked like he did at Suzie’s Farm in San Diego and I took a basic throwing leaves picture

Lake Hemet is about a fifteen minute drive from town and it’s just a regular lake. Funny thing about this lake is that there is a section fenced off for people with passes. That section is full of trees with yellowing leaves. However, if you look around the rest of the lake there are no yellow leaved trees in sight. Not even across the street of the fenced area! Suspicious!

We parked on the outside of the fenced area were people were fishing, having a picnic and just walking around.

Idyllwild is a great weekend getaway if you live in Southern California. An alternative to Big Bear or Yosemite. It’s a 2 hour drive from Orange County and San Diego and an hour from Palm Springs. I highly recommend this vacation spot for people who want a remote, small town feel and outdoorsy, hikers.

Suicide Rock is good for people who want a beautiful mountain top view and is okay with a moderate trail. You should bring snacks, maybe lunch if you are doing a morning hike and lots of water, account about 4 and half hours to complete.

Next time I come back, I’ll definitely want to try a different trail. Another hiker suggested the Ernie Maxwell Scenic Trail as an alternative, easier hike. 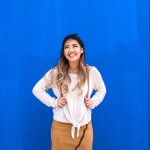 Justine is a bubbly, outgoing creative who has always loved traveling. Growing up, her family took trips to the Philippines, the Bahamas and road trips all over California. A collector of pressed pennies, unique postcards, quotes from other travelers. She is always drawing, especially while she travels.